Specialist knowledge and handling skills were required for the erection of the St Athan War Memorial.

A new Commemorative Garden has been established at the Special Forces Support Group Head-Quarters at St Athan, Vale Of Glamorgan, South Wales. A new 5 metre tall, all-polished Black Granite Obelisk and base weighing in excess of 5 tonnes was transported and assembled under high security in a very tight time-frame and in readiness for Remembrance Day on November 11th 2009.

In addition to the Obelisk, two large matching headstones – weighing over 2 tonnes each and 2.2 metres wide and 1.7 metres tall – bearing the names of personnel lost in recent conflicts were also erected flanking the Obelisk. 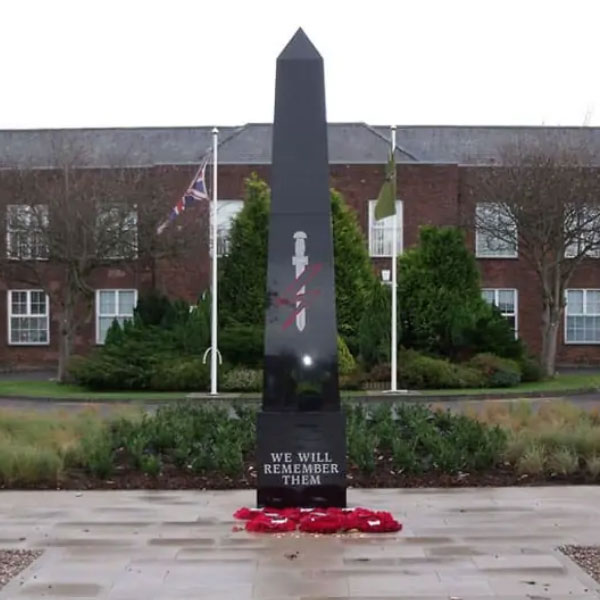 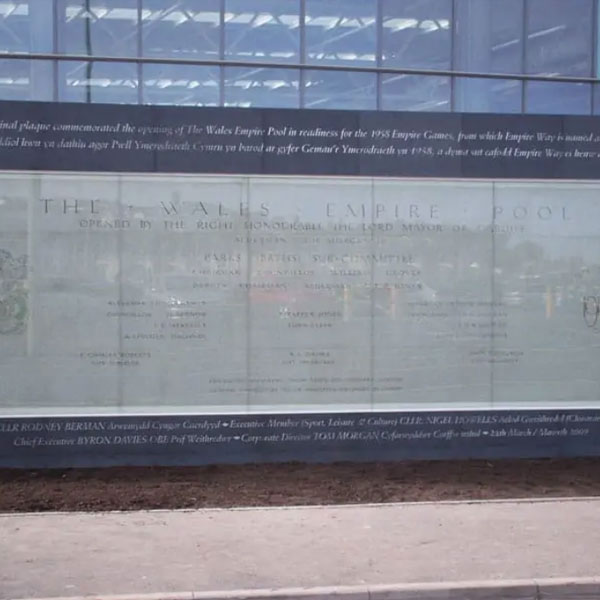 To mark the opening of the new International Swimming Pool in Cardiff Bay, Summers Memorials created an external display for the original Empire Pool plaque that was unveiled when the Empire Pool was opened on 18 April 1958.

The old plaque had been taken down by the demolition company who were removing the Empire Pool to make way for the Millennium Stadium. The plaques were securely stored for over ten years and were in desperate need of restoration and refurbishment.

After refurbishment, the plaques were carefully housed behind special toughened safety glass in a solid construction to the side of the new International Pool building, which was designed and built by Summers Memorials. The front fascia of the construction is clad with finest Welsh Slate with an inscription engraved in both English and Welsh, resulting in a stunning feature to this ultramodern cutting edge building.

Summers Memorials was proud to work alongside Cardiff-based signage company Morgans Consult to create this branded sign for EADS Defence & Security. Crafted from Blue Pearl Granite, the sign base was co-designed and constructired by Summers Memorials and now is a proud and significant enhancement to the Company’s facility in South Wales. 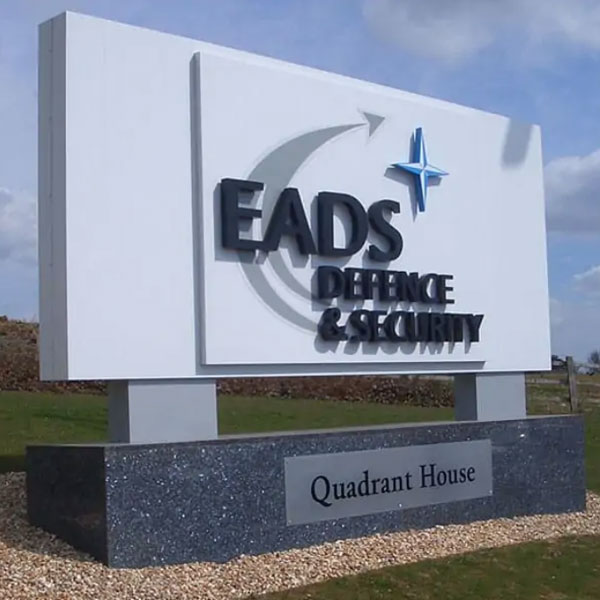 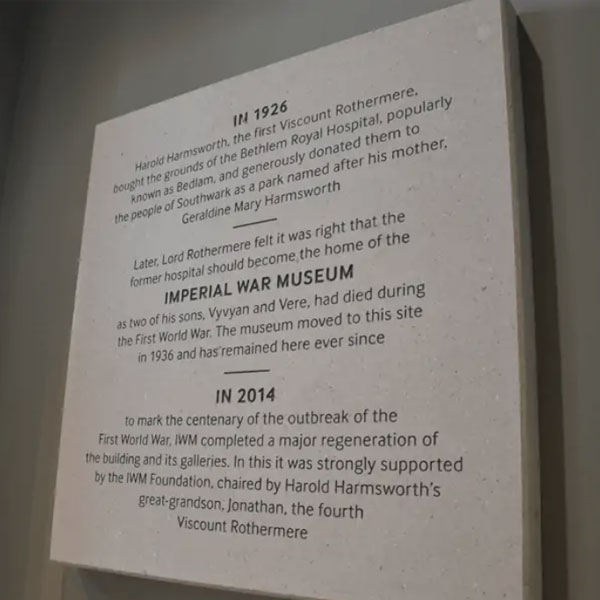 Summers Memorials were proud to be asked to create a commemorative plaque for the Imperial War Museum.

This hand-crafted plaque commemorates the 1st Viscount Rothermere, Harold Harmsworth, who donated the Imperial War Museum’s site in 1936. Harmsworth bought the grounds of a former hospital and then donated the site to the museum following the death of two of his three sons.

Our skilled stone masons hand crafted this plaque and finished it with black engraved inscription. The whole team were honoured to have been involved in this project.

Contact us for more information about starting a special project.

This website uses cookies to improve your experience while you navigate through the website. Out of these, the cookies that are categorized as necessary are stored on your browser as they are essential for the working of basic functionalities of the website. We also use third-party cookies that help us analyze and understand how you use this website. These cookies will be stored in your browser only with your consent. You also have the option to opt-out of these cookies. But opting out of some of these cookies may affect your browsing experience. Read our privacy policy here.
Necessary Always Enabled
Necessary cookies are absolutely essential for the website to function properly. These cookies ensure basic functionalities and security features of the website, anonymously.
Functional
Functional cookies help to perform certain functionalities like sharing the content of the website on social media platforms, collect feedbacks, and other third-party features.
Performance
Performance cookies are used to understand and analyze the key performance indexes of the website which helps in delivering a better user experience for the visitors.
Analytics
Analytical cookies are used to understand how visitors interact with the website. These cookies help provide information on metrics the number of visitors, bounce rate, traffic source, etc.
Advertisement
Advertisement cookies are used to provide visitors with relevant ads and marketing campaigns. These cookies track visitors across websites and collect information to provide customized ads.
Others
Other uncategorized cookies are those that are being analyzed and have not been classified into a category as yet.
SAVE & ACCEPT
Brochure Request
Enquire
Brochure
Brochure
Woodlands
Enquire
Special Projects
Installation
Insurance
Maintenance
Restoration
Home Visit
Collection
Etching Brochure
Etching Enquiry
General Enquiry